In a previous post, I tried to explain the idea that spike initiation is “sharp” using a few drawings. The drawings represent a ball on a hilly landscape. The position of the ball represents the state of the system (neuron), and the altitude represents its energy. The ball tends to reside in positions of local minima of the energy. Spiking occurs when some energy is added to the system (stimulation with electrode or synaptic input) so that the ball is moved past a hill and then falls down: 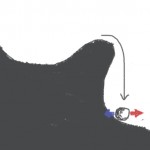 What is not seen in this drawing is what happens next. The membrane potential is reset and the neuron can fire again, in principle, but in the drawing the ball ends up on a lower valley than at the start. Biophysically, that corresponds to the fact part of the energy that was stored in electrochemical gradients of ion concentration across the membrane has been released by the spike, and so indeed the energy is now lower. Spiking again would mean falling down to an even lower valley. But since energy is finite, this has to stop at some point. In reality it doesn't stop because the neuron slowly rebuilds its electrochemical energy by moving ions against their concentration gradients with the sodium/potassium pump, which requires some external energy (provided by ATP). In the drawing, this would correspond to slowly moving up from the low valley to the high valley. Unfortunately you can't represent that in two dimensions, you need to represent a road spiraling up around a hill. This is the best photographic illustration I have found: 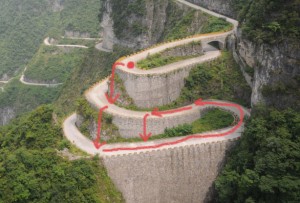 This is a road in China (Tianmen mountain). The neuron starts on top (red ball). With some external energy, the ball can be moved up past the barrier and then it falls. It lands on the road, but on a lower level. It can be made to spike again. Slowly, continuously, some energy is added to the neuron to rebuild its electrochemical gradients: the ball moves up the road. As long as spikes are rare enough, the neuron can continue to spike at any time (ideally, the road should spiral around the hill but it's close enough!).

Smooth spike initiation would correspond to something like that (a road in the Alps): 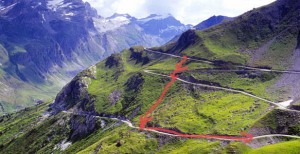